All aboard the USS Massachusetts! 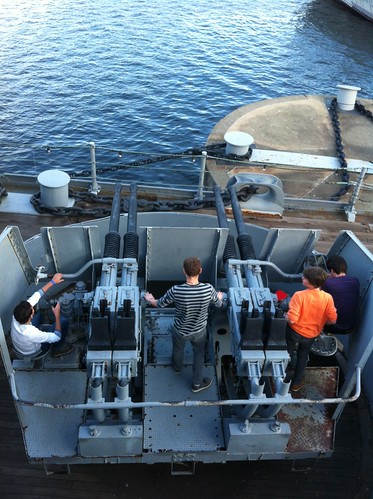 Despite only receiving its independence 237 years ago, the United States has forged an illustrious history punctuated by hard-fought wars on both home and foreign soil. Blood was shed in the name of independence during the American Revolutionary war, and the issue of slavery caused a bitter divide up and down the Mason-Dixon line leading up to and throughout The Civil War. During the twentieth century, America found itself involved in both World Wars and The Korean War before fighting a losing effort in the jungles and rice paddies of Vietnam. The terrorist attacks of 9/11 have resulted in wars being waged this century in Iraq and Afghanistan, both of which at this time are winding down, but with trillions of dollars already being spent.

American classrooms allot a good amount of time each school year to chronicling these important events and our Boston curriculum has followed suit. New England has proven to be a veritable historical playground, with a myriad of sites set aside to honor those who have lost their lives during battle. We visited two such sites recently during a visit to the city of Little Fall, Massachusetts. First, we paid a visit to the USS Constitution museum before heading off for a night aboard the retired battleship USS Massachusetts. Better known by her nickname “Big Mamie,” the USS Massachusetts saw action on both the Pacific and Atlantic oceans during World War II. Safety clearly resided within her steel hull, as none of the approximately 2,000 Navy sailors or Marines aboard were killed during armed action. Shortly after the war, the USS Massachusetts was decommissioned and sent to a reserve fleet, eventually ending up with the museum ship status it holds today.

The weXplore expedition to the USS Constitution museum and USS Massachusetts was arranged by global studies teacher Nick Martino, who saw the outing as a way for his ninth and tenth grade students to experientially examine the concept of American Identity being studied in their most recent unit. For the 11th grade students, the trip provided an opportunity to spend the night aboard a battleship that saw action in America’s Allied Hopping Campaign during World War II – a focus of their studies in Russell Cailey’s IB history class.

The outing certainly fueled a high level of creative output from our students, who were asked to create a unique first person experience based upon their time aboard the USS Massachusetts and with the U.S. Navy.