What is the impact of geography on our ability to connect with the world?

On December 6th, 2012, Buenos Aires’ name became ironic. While the morning routine of making coffee and walking to work was uneventful (aside from the rain and rolling thunder), those of us sitting in the staff room started to receive emails, phone calls and tweets about a toxic cloud that was covering the “City of Good Air.”

Social media kept us in the loop, instructing us to close all of our windows and to turn off all air conditioning units, a necessary — though unpopular — course of action for shutting out the sulfuric-like gas emanating from a shipping container explosion at the port.

We proceeded with classes in rooms that grew more humid and stagnant as the minutes ticked by, but the physical act of closing ourselves in did not limit the virtual activity we had planned for that day. Just as social media informed us about the news in our area, social media connected us to our guest speaker, co-producer of One Day on Earth, Brandon Litman.

Those of us on the Buenos Aires side of the Skype call looked a little worse for wear in our hot and humid classroom. But regardless of the discomfort, students and staff squeezed in, eager to take part in the conversation with a social media giant located in New York.

Brandon Litman and his colleague Kyle Ruddick began the world’s largest crowd-sourced film project One Day on Earth, which aimed to gather video footage from every country in the world on the same calendar day.

With their next global film project on 12.12.12 fast approaching, we wanted to know how TGS could not only take part in filming but in helping to spread the world of this initiative through our own outreach project.

Through spreading word of One Day on Earth, THINK Global School was going to test just how global we really were.

The results of this outreach project were impressive, as we thoughtfully engaged with people in 36% of the world’s countries. It took a great amount of effort on behalf of the students, faculty and staff to reach out to that many people in a meaningful manner (rather than spamming or writing in bulk). At the end of the project, TGS finally had one way to measure their social media impact as a community of global, digital citizens. 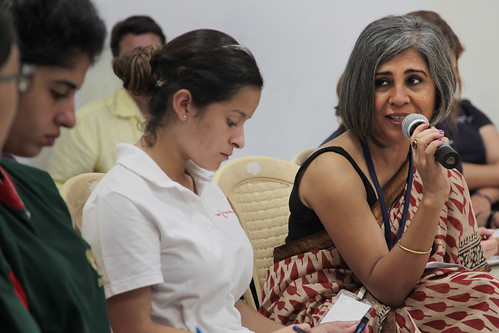 One year later, TGS received an in-person visit from yet another guest speaker who attempts to wrangle the power of social media: Urmi Basu. Urmi is the passionate founder of New Light, an organization that supports the education and care of children and women in Calcutta’s oldest red light district.

THINK Global School first discovered Urmi’s work at New Light through IB Language and Literature teacher Breanna Reynolds, who was working on a photography book of New Light’s students. New Light was also featured in the book and documentary Half the Sky, a title on TGS’ IBLL reading list.

After our students’ watched Urmi’s cameo in the Half the Sky documentary, she spoke to them about the realities of transgenerational prostitution in the neighborhood of Kalighat and then opened the floor to questions from all. Upon being asked “How can we help?“, Urmi mentioned the upcoming social media campaign Nirbhaya Diwas, which draws its name from the 23-year-old girl who was gang-raped and killed in Delhi. The following explanation comes from the campaign website:

New Light works to promote gender equality through education and life skill training. The work pivots on the principle of reduction of gender violence and abuse thereby creating a just society with millions of Nirbhayas everywhere.

Join us in shaping December 16th as Nirbhaya Diwas…a day to mark Zero tolerance for rape in India. It would be a day to observe genuine equality and foster mutual respect between the sexes. This is not a cry for vengeance but a demand for justice and equal rights in safe public space. The strategy is to use a 5-minute video depicting girls from all social backgrounds creating an image of universal womanhood. The video along with the petition will be presented to His Excellency The President of India with a request to mark 16th December as Nirbhaya Diwas.

Once again, THINK Global School students and staff were called upon to utilize social media to make a difference –- in this case, to sign and share a petition paired with a meaningful video that furthers the message. 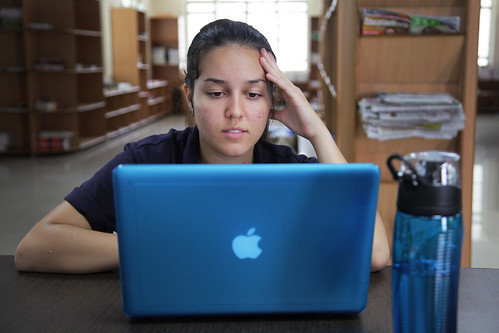 As Brandon stated last December, none of this would have been possible even a few years earlier. As Urmi responded to Grant’s question of help, what students and social media gurus are able to do today with the Internet is something older generations cannot even fathom.

And as TGS students learn in their technology and communications class, social media can make a big difference (or waste a lot of time if not used in such meaningful ways).

It’s often overwhelming to consider the impact of geography at this somewhat location-independent school. We could be in one physical location receiving news about that city from someone across the world. An expert in their field can enter our classroom by skipping the airport and instead opening their laptop. And sometimes we are lucky enough to cross paths with someone in real life, to be in their physical presence and learn from them face to face; this is an unparalleled luxury.

The students will often list this physical proximity as a facilitator of their learning, which is not surprising considering their desire to be out in the world (which they could simply learn about from the Internet). But in the same moment this sentiment is expressed, they will Facebook message a friend back home or view a video from across the globe. Regardless of geography, our students — and digital citizens everywhere — find a way of connecting and learning from afar. 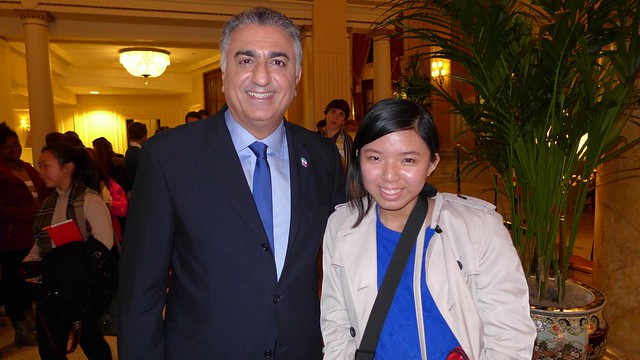 Our students have many great opportunities to interact with knowledgeable and motivating figures in society today — an opportunity we like to extend with our media — and many of these visionaries, whether virtual or “in real life,” request that the students think, question and then face outwards to communicate those thoughts to others via social media.

From Prince Reza Pahlavi of Iran to BBC journalist Phillipa Thomas, our esteemed visitors like to remind us just how much impact we can have on our world through something as small as a tweet.

After a crooked night of sleep on a trans-Atlantic flight we feel the distance around the earth’s waist in our necks. The constant practice of calculating time zones keeps the immense size of the world at the forefront of our minds. However, we have tools in our toolkit that make hemming that distance possible.

While it will take many more years to understand how we engage with physical and virtual experiences and the learning that results, it is exciting to know we are learning alongside humanitarians, filmmakers and royalty alike what is possible with an iPhone.