THINK Global School went on a two-week journey to the Galapagos Islands. With the majority of our classes taking place outside, we wrote Chinese characters in the sand, practiced our Spanish, learned about the effects of tourism on the Galapagos Islands in Global Studies, and finished up our probability unit in Math. In English Literature class, we started an introduction to our magical realism unit.

Let’s not forget what we did in Science though. The grade 9’s and 10’s were working on the theory of evolution, and how life first began on this earth. Filled with what we learned from snorkeling trips, we learned much more than we ever would have sitting in a classroom. However, not all it it was lectures. In between classes, we swam in the beautifully clear Pacific Ocean. Surrounded by barking sea lions, and sometimes playing chase with them, we all got to appreciate how diverse the Galapagos is. 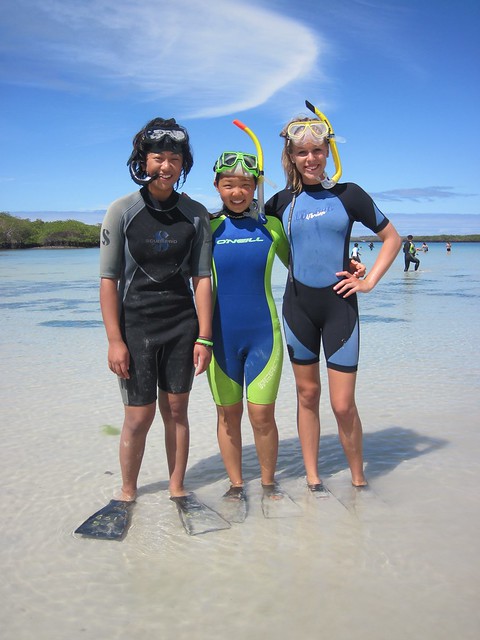 Armed with flippers, wetsuits, and snorkel masks, the 26 TGS kids took an introduction to snorkeling. We went to Leon Dormido, an island that looks like some giant had taken an axe and chopped the rocky outcrop into two. In between the two rock faces is a narrow passageway of water, filled with sharks, tortugas (tortoises), and fish. With the full force of the water on our backs, we rocketed through the passageway.

Not only were there classes, lazing at beaches, and snorkeling trips; we also learned about the recycling system on the islands. A trip to the nearby recycling plant taught us what the local Governments were doing to try to keep the Galapagos clean and friendly.

“VOMIT VESSELS?!” I hear the concerned parents cry. On our two-hour trip across open water to Isabela, we were all in tiny boats. The first half hour was filled with laughter and an attempt at card playing… however, after several large waves gave us some unexpected flying lessons, we decided to huddle up and pretend nothing was happening. That sure didn’t work! We had to hang our heads out of the boats, getting waves and wind slapping us in the faces, as we “fed the fishies,” in the words of our science teacher. Soon we all gave up, and just closed our eyes and tried to sleep. Who knew sticking your head into the sand actually worked as a way to avoid problems?

Not only did we snorkel out in open water, but we also swam in mangroves and small shallow beaches. I remember Lin, our Mandarin teacher, saying:“Look at all these baby shrimps!!!” They weren’t. They were mosquito larvae. And yes, yours truly did swim right into a bunch of them.

I remember the good times, the laughter, the sun, playing tag with the sea-lions, the classes… what do you remember?