iTunes U: encrypting and decrypting information

If you were able to decipher the above gibberish, congratulations: you’re a successful cryptographer! Cryptography is the act of transforming data into an unreadable format, known as cipher text, and then after the data has been encrypted, those in possession of the secret key can reveal its content. Thanks to encryption, we are now able to securely shop online, swipe credit cards in a store, and network on sites which collect our personal information like Facebook and Twitter. Without this protection of data, most businesses would be rendered defunct.

Cryptography isn’t a recent revelation birthed from binary, however. The term cryptography actually stems from the Greek words kryptos and graphein, which translate to hidden and writing, respectively. Before the Greeks, cryptology existed in Egyptian, Indian, Chinese and Mesopotamian civilization, but its usefulness was undermined by the fact that few back then could read and write. The Greek history of cryptology is much better documented, and shows that the use of cipher (algorithms used to perform the encryption/decryption process) systems began here around 400 B.C. During this time messages were transcribed on papyrus, and a stick of a certain diameter, known as a scytale, was required to decrypt it. When the papyrus was wrapped around the correctly proportioned scytale, the characters would line up and form a message. 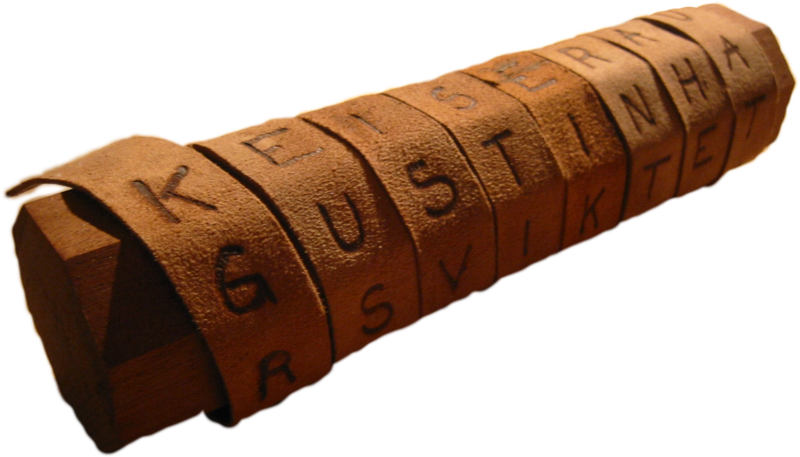 A slightly more advanced cipher to emerge during this time period was the Caesar cipher, aptly named after the famed Roman general who utilized it for private correspondence. The Caesar cipher works by shifting all letters by a set number down the alphabet. Caesar famously used 3 shifts for many of his communications.

While Caesar might have been one of the first generals to utilize cryptography, he certainly wasn’t the last. Cryptography, and subsequently cryptanalysis (code breaking), had a massive part to play during World War II. The Allied forces’ ability to successfully crack German codes during World War II altered the course of history forever. These codes, which were typed out on what were known as Enigma machines, were cracked by brilliant mathematicians such as British-born Alan Turing, whose electromechanical bombe machines are credited with saving thousands of lives. To this day, mathematical cryptology and cryptography play an integral role in wars waged around the world.

Cryptology in the classroom

Math teachers: do you think your students are up to the challenge of decoding some ciphers? THINK Global School mathematics teacher Guillermo Machado has prepared an iTunes U course utilizing the same strategic concepts of encryption and decryption used by cryptographers. In the course, entitled “Encrypting and decrypting information,” students will learn about the three stages of message encryption:

Course Overview: This unit is meant to introduce the idea of encryption of information. It relies on a series of fun, pair group exercises that gradually develop the student’s ability to both encrypt and decrypt information. It is planned in order to allow for differentiation by outcome, since different students will be able to produce, and then attempt to decrypt, codes of varying degrees of complexity or mathematical sophistication.

Through these exercises the students have the opportunity to develop a deeper understanding of what accurate, unambiguous communication is. They also work on appreciation of patterns, and use of creativity in a mathematical context. They will appreciate the use and value of symbols, and work on their efficiency and synthesis.

Click below to open “Encrypting and downloading information” in a new window: