There are moments as a teacher, or as a Head of School, where all you can do is to sit back and marvel at what your students are doing. It actually happens on far more occasions than we sometimes care to remember, but on every occasion there is that sensation of goose bumps and the inevitable tension in your chest. This afternoon, at the Gotham Comedy Club, was no exception, and I have to state that I am still under the spell that was cast amongst the shadows in the Comedy Club.

Earlier, I had arrived to witness the microphone being fitted to the stand by professional hands; hands that were not sweaty and did not shake. I observed with interest as the lighting was modified to capture the atmosphere that was deemed appropriate for effective presentation, which to others may have resembled a terrifying patchwork of shadows and light. Finally, there was the “main man” himself, Taylor Mali, conducting the sound check using a range of “voices” that were so natural and instilled even greater dread for those who were about to launch their careers as poetry presenters.

Yet after Taylor had commenced with a few poems and we had met the first of his guests, both who were received with rapturous applause, it was time for our own students to make that gut-wrenching walk to the loneliest place in New York: solo and on-stage at the Gotham Comedy Club. 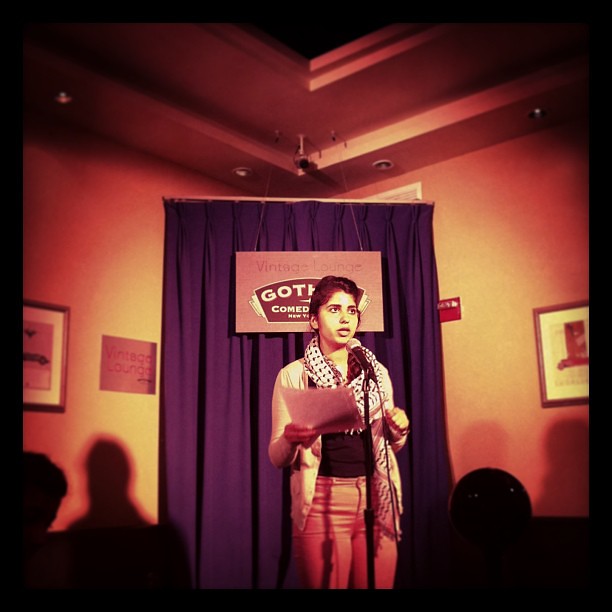 Adjusting the height of the microphone with aplomb (well, have you tried it?) required the will to dominate the shaking, and that was nothing compared to the first gaze into the room as the prelude to the opening line. But student after student controlled their terror, stood with poise and delivered their poem with conviction and a sense of the real power of the meaning of each word.

There is no greater feeling of vulnerability than to narrate a personal poem in front of an audience! There is no stronger dread than that one you feel when the words appear to disappear from your memory and everybody is waiting for you. But nothing arrested the deliveries. Each student performed as if they were born to be standing there, confident and committed to the words that they had chosen to express the beliefs or fears that they were willing to share with others.

It was a wonderful afternoon, and one that I sense might well have far reaching consequences for each of our young performers. I hope that they have discovered something about themselves: their courage. Believe me, to stand alone beneath the lights and to open your hearts to others is a fearful thing to contemplate. To do so is to cross a boundary and once crossed, who knows where it may lead you.