I HAVE TO DISAGREE. I have changed the world with 15 kids, and it’s a better world because of it.

I sit in an airport in Shangri-La, on the Chinese-Tibetan border. I have 15 exhausted young adults in front of me; they are no longer kids. We spent the last week in southern China. It was important that they experience not only the bustle of Beijing but also the beauty of the Chinese countryside.

We visited the old town of Dali and the beautifully lit Lijiang. We hiked the Leaping Tiger Gorge – 25 km over two days – a real test of endurance (believe me, those 28 bends up the mountain are a test of anyone’s endurance!). Only very few complaints were heard.

We ended up in Shangri-La, a beautiful little town with the world’s largest prayer wheel.

We spent an afternoon at an orphanage, dancing, singing and playing with the children. We learned how one person with a dream can make a difference in the lives of many, just as Tendol Gyalzur, founder of the orphanage, did. 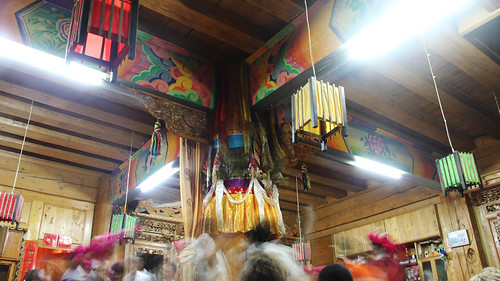 Dancing with a family at a Tibetan home. Photo: Lindsay Clark

15 Kids Can Change the World

On the last night of our trip, we were guests of a local Tibetan family for dinner – traditional Tibetan yak milk tea, yak cheese, and yak meat on our plates. Dancing, singing, laughter followed soon after. The daughters and granddaughters of the family performed dances and songs before our TGS kids got up and performed songs and dances from their countries, much to the amusement of our host family.

This was where I saw how these kids I met in Stockholm had transformed into young adults. They were gracious and confident. Curious and engaged. We did not speak their local language (other than a few words of Mandarin) nor did they speak any of ours, but that did not stop the sense of belonging. Sign language, smiles, and the use of an interpreter got the messages across.

It was there at the Tibetan house that I saw the success of the school. Mavis, a young lady from Ghana, who could barely raise her eyes when she arrived in Stockholm, stood in front of a crowd of almost 35 people and sang. Beside her stood her friend Alice from Sweden, whispering to her not to be afraid; she is right there to support her, always will be, she promises. And Mavis’s voice rang out load and clear.

Shangri-La was made famous in the book Lost Horizon, a fictional utopian lamasery by James Hilton, and upon reading this in the airport, a passage rang out as ever-relevant to our experience in the beautiful city. I quote from the book:

It is the entire meaning and purpose of Shangri-La. It came to me in a vision, long, long ago. I saw all the nations strengthening, not in wisdom, but in the vulgar passions and the will to destroy. I saw the machine power multiplying, until a single weaponed man might match a whole army. I foresaw a time when man, exalting in the technique of murder, would rage so hotly over the world, that every book, every treasure, would be doomed to destruction. This vision was so vivid and so moving, that I determined to gather together all things of beauty and of culture that I could, and preserve them here, against the doom toward which the world is rushing. Look at the world today. Is there anything more pitiful? What madness there is! What blindness! What unintelligent leadership! A scurrying mass of bewildered humanity, crashing headlong against each other, propelled by an orgy of greed and brutality. A time must come my friend, when this orgy will spend itself. When brutality and the lust for power must perish by its own sword. Against that time, is why I avoided death, and am here. And why you were brought here. For when that day comes, the world must begin to look for a new life. And it is our hope that they may find it here. For here, we shall be with their books and their music, and a way of life based on one simple rule: be kind! When that day comes, it is our hope that the brotherly love of Shangri-La will spread throughout the world. Yes, my son; when the strong have devoured each other, the Christian ethic may at last be fulfilled and the meek shall inherit the earth.

Robert Conway: I understand you, father.

It doesn’t matter to me of what belief you are: Christian, Buddhist, Jewish, Hindi, Muslim, Atheist, agnostic or just spiritual in your own way. It doesn’t matter if you believe that the “meek shall inherit the earth.”

Just live your life by the phrase: be kind.

That is how TGS is changing the world, fifteen kids at a time.