The beginning of summer typically marks the end of the school year for students; it is a time for relaxation after the nerve-wracking experience of final exams. The 2011-2012 school year was a remarkable one for THINK Global School, and the Residential Life Team wanted to cap the Berlin term off with something that the students would never forget: the first TGS Amazing Race! The race, which lasted from June 24th through June 28th, was documented by our students through photography, video and SPOT blog posts. The photography throughout this recap come courtesy of students Hudson and Charis, who kept their shutters open throughout each city. TGS student Maya shot the amazing video below, providing a running documentary from start to finish.

While our students were away on the Model United Nations trip at the beginning of June, the Residential Life Team traveled to Prague, Budapest, Salzburg, and Vienna to make connections with shopkeepers, preview the accommodations and secure activities for the race. After determining that all of the prerequisites were satisfactory, the team returned to Berlin under the guise of having been in Vienna.

This past weekend, however, the beans were spilled and the race was on. After viewing a teaser trailer and receiving the race guidelines, the student’s prepared to focus on what they had been learning all year: staying together as a group and working together as a team.

Each team began their race in Berlin, Germany on June 24th. The following table illustrates where the students spent each day, with the color representing that portion of the trip on the map.

The race began with all of the students gathering at the Brandenburg Gate in Berlin, where the students were presented with their first challenge. The first two teams to answer this correctly were allowed to precede to Prague via the early train, with the remaining teams staying behind. Other challenges on this leg of the trip included:

On the second morning of the race, each team was given a lock puzzle, with the first team to solve it having the option of leaving early for Budapest, and the remaining students taking the train during the night. Upon arrival in Budapest, the first challenge the students encountered was simple enough and one of the few moments of pure relaxation: a visit to the Hungarian Royal Baths. A nice cleansing before breaking a sweat for the remaining challenges:

The students began their day in Salzburg by taking in the landscapes made famous by ‘The Sound of Music’; beautiful cobblestone pathways, bridges and winding roads that led up to the Mirabell Palace Gardens. Here, the teams took turns reenacting poses from the film on a bridge before heading off to their remaining challenges:

Finally, the race was to wind down in Austria’s capital city. On the morning of June 28th, the students boarded the train from Salzburg to Vienna. The first mission took place at Prater Park, which is one of the world’s oldest amusement parks. Here, students were able to confront their fears on the Prater Turn; a swing ride which climbs 311 feet into the air before spinning for several minutes. This proved to be the ultimate act of teamwork for some, as all students were able to conquer their fears and board the ride.

The finale of the race came with the students making their way to Schönbrunn Palace, a former imperial summer home that contains a stunning 1,441(!) rooms. Sweaty and exhausted, the various teams jogged to the large fountain that sits at the center of the palace’s grounds. Both the school’s faculty and administrative staff were waiting for the student’s arrival; the latter having come to Austria specifically for the event. 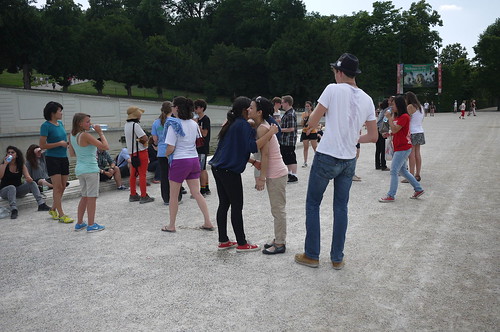 All of us at THINK Global School are extremely proud of the effort put forth by our students over the course of the TGS Amazing Race, and judging by their reaction it was the ideal end to a school year marked by adventure and growth. Our second school year has come to a close, and we now look ahead to the new faces and opportunities that await us in Buenos Aires!