Visiting the Sambhavna clinic: life after the Bhopal disaster

While enrolled at THINK Global School, students are encouraged to be creative during the course of their studies and travels. When the students document these thoughts, we are often delighted with the results. In her travel writing piece, “Visiting the Sambhavna clinic: life after the Bhopal disaster,” 11th grade student Emma D. describes how the non-profit Sambhavna clinic is making life better for for those affected by the 1984 Bhopal disaster, a gas leak at the Union Carbide pesticide plant which left thousands dead and over half a million injured and debilitated.

Driving through the dirty backstreets of Bhopal, we pass puddle after dirty puddle. Litter floating in dirty puddles — puddles that smell like they shouldn’t. The light drizzle that sprinkles our faces as we get off of the bus adds to the puddles that I see everywhere. The terrible, still water of each tiny lake gleams at me from every corner.

My mind was playing tricks on me; a mental game that left my skin crawling and cringing with thoughts of dangerous gases, death and disease.

We had previously discussed the Bhopal disaster before embarking on our trip northward, away from the safe confines of the Indus school’s walls. A white, relatively clean room at an international school was an easy place to discuss the terrible atrocities that came about due to the Bhopal disaster in 1984. It was easy to remove myself from the enormous amount of poisonous gas leaked into the air on that fateful day. To forget that the figure of half a million gas-exposed individuals were real people with stories and families of their own. Easy to look at pictures of diseased and disabled children and think sad thoughts but forget about it a little later. While I sipped on a bottle of chilled and very clean water, it was easy to wonder about the ongoing water contamination that still affects and poisons thousands of people. 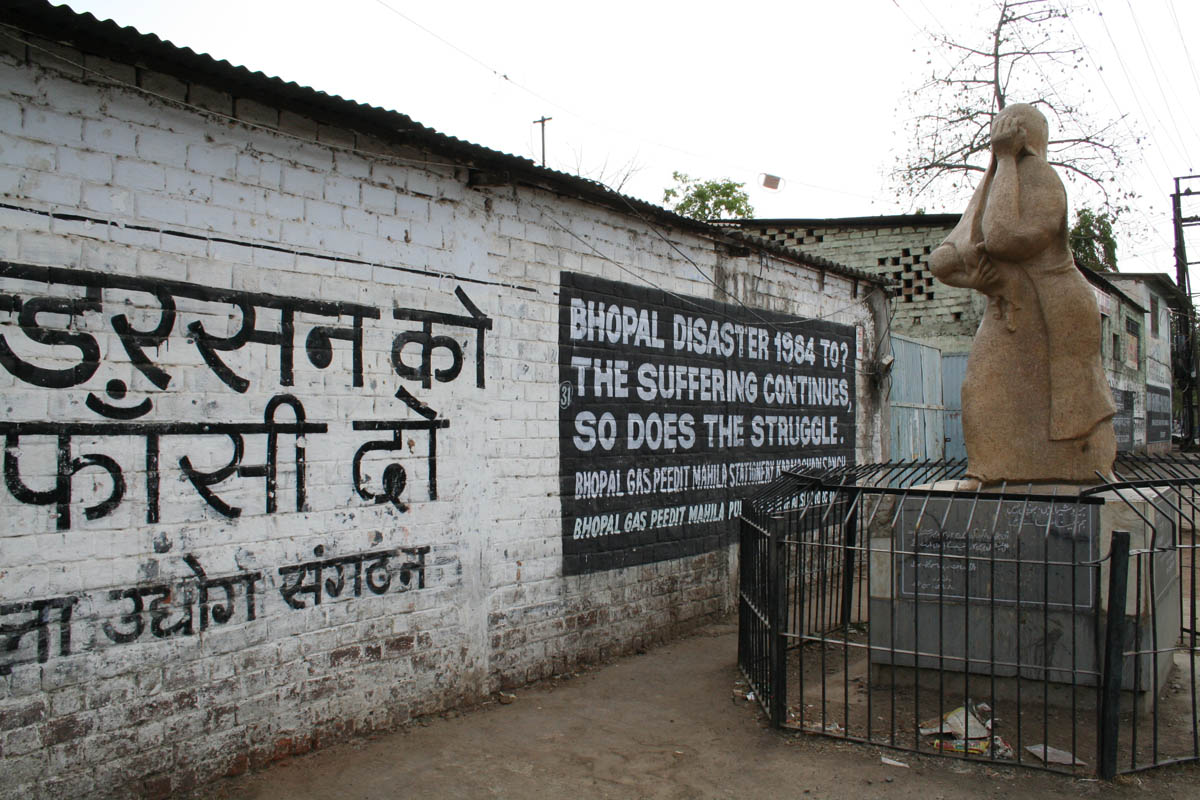 It is all easy until you are on the scene, and it is then that it is just real. It is no longer a figure on a paper or an image in your mind. Something you can flip over, think about, and then forget. The destruction is in your face and close enough to touch.

Every person I passed on the street became a possible gas-exposure sufferer. Every pool of water and random drip was potentially contaminated. Every abandoned shoe and dirty corner was a tale of disaster and suffering.

The area we walked through was poor and deteriorating, suffering from years of neglect and a high population. The combination of dreary weather and scene was a little suffocating (though that may have been in my head along with thoughts of gas), so when we came to the small, safe haven of Sambhavna Clinic, it seemed like a sparkling castle in the midst of a field of ruins.

It was made of brick: a warm red color with green ivy creeping its way up and twirling around anything that it could get its green fingers to brush. The structure was one of the only stable and well built buildings around, and it stuck out like an oasis in a desert.

Entering the clinic was like entering a home. “Clinic” brings to mind the thought of antiseptic white walls and empty halls, and Sambhavna, in my view, was not a clinic. It was welcoming and light, plants popping out of every corner and tiny piece of space available. The building itself was open with many courtyards and balconies. On the back side there was a garden planted thick with trees and flowers that I could not name. Men, women and children walked around freely, the majority of them smiling.

Someone asked a little boy flying a kite why he was at the hospital, assuming that he was one of the 30,000 patients who are registered at the clinic for gas exposure and water contamination related problems. He replied that he was not a patient, but came to the hospital to play because they had the best playground and were very welcoming.

The most incredible thing of all was the small pharmacy located in a detached cottage structure just to the left of the main building. As we approached this structure there was a strange smell in the air: a sour, almost acidic smell. A man stood on the balcony, counting tiny green pills that were spilling out of a massive sack. Behind him, in a small room, were several huge pots. Two were bubbling with an unknown black substance, the source of the sour smell. The others served as holding places for white powders or various pills. The pots were occasionally stirred by another younger man in a jumpsuit.

This was the clinic’s private pharmacy.

This tiny clinic, in the middle of one of Bhopal’s most grief stricken areas, makes almost all of the Ayurvedic medicine that its patients require. The medicine, which is extracted, mixed and put together by Sambhavna, came from the 120 different plants crammed into the 1 acre plot that was the clinic’s back garden. Up to 76 different types of medicine were created in this very room.

The pharmacy focuses on purely organic medical treatment, projecting the idea that the patients of this horrific disaster had put enough chemicals into their bodies. Ayurvedic medicine is beneficial to the entire body. It is not a symptom-based treatment and works on the person’s well-being as a whole. In addition, Rajna, an inspiring women who talked to us about the clinic and its purposes and problems, explained to us that Sambhavna was attempting to “break the circle of poison.” This concept is based on the fact that most companies that are the cause of many terrible chemical disasters are also the sponsors of chemically-made medicines for various diseases. In the case of the Bhopal disaster, the company that previously owned the factory at the time of the disaster — Union Carbide — were also sponsoring a large cancer research organization. Medicines made by a lot of companies are coming from the money given by the very cause of the disaster itself, and Sambhavna attempts to break that cycle by making their own treatments.

The medicines created in Sambhavna include cures for diseases such as liver problems, diabetes, skin diseases, and reproduction problems, all coming in the form of either oils, tablets or powders. Most of the medication has a linseed base, though many of the skin treatments are made from the bark of the neem tree, which is held in high regard for its healing properties.

Medication is free for all registered patients, and they are often taught how to grow and make their own medicine from various plants. In fact, the clinic focuses an entire outreach program on the giving of plants to the community and educating the people how to make use of these plants.

Sambhavna goes as far as to wash their floors with only organic products, not wanting to add to the already chemically-damaged patients’ worries.

This clinic should be an inspiration to us all. Not only are they totally self-sufficient, which is a wonder in and of itself (they power their electronics from solar panels and have several bore-holes), but they also go about changing millions of peoples lives so that they to can take care of themselves.

Would it not solve some of the world’s most worrying health problems if we all just grew and made our own medicine? Less fortunate individuals would be able to afford treatment, dangerous chemicals would no longer be used, and the care and acknowledgement of the importance of plants would be vastly encouraged. This philosophy of teaching for long-term benefits could be used to revolutionize the modern medical world today. Just like at the old proverb: “if you give a man a fish, you feed him for a day, but if you teach him how to fish, you feed him for a lifetime.” If we teach people how to take care of themselves, generations of people could benefit.

All of this inspiration from a tiny, almost unknown, self-sufficient clinic. Thank you to Sambhavna for all that they have done.